CRAIG DUSWALT: HOW IT WAS NEXT TO AXL ROSE

WELCOME TO MY JUNGLE – A BOOK REVIEW 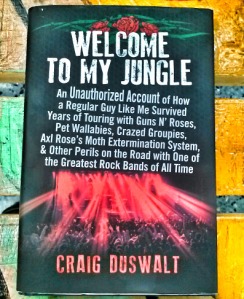 Craig Duswalt’s new book, Welcome To My Jungle, was released in April 2014 (BenBella books, Inc. Dallas Texas).  It is ‘an unauthorized account of how a regular guy survived years of touring with the rock band Guns N’ Roses’.  Guns N’ Roses is the famed (1980s to 1996), rock band dominated by its lead singer W. Axl Rose (better known as Axl Rose).

Craig Duswalt was Axl Rose’s personal assistant from November 1991 until GNR’s last public concert of Use Your Illusion Tour in Buenos Aires on July 17, 1993.  Being a personal assistant to Axl Rose was an experience not unlike riding a tiger.  Not everyone could take it and it was a job that had to be shared with still a second assistant – Robert Finkelstein.  For those who are interested in the cultural history of pop music, this book is one more source of information and a great entertaining read.

The book’s title is ostensibly borrowed from the GNR song Welcome to the Jungle.

This book is hilarious and attention-grabbing. It is easy to read because it is written in conversational English.  The three words most commonly repeated in this book are: “cool”, “awesome” and “dude”.

I did nothing else until I finished reading this book the first time.

Many of the stories in the book were familiar to me because I heard them previously from Duswalt told in public as they were recorded and video-taped by him.  The conversational style of the book is a result of using those audio reminiscences by him and his GNR partner and buddy Robert Finkelstein who was also in GNR’s entourage during the ‘Use Your Illusion Tour’.

If you are interested in in Guns N’ Roses and its celebrity lead artists – Axl Rose, Slash and Duff McKagan – read this hilarious book and enjoy it.

I read the book with interest three times, (and half more time during the writing this review…).

Duswalt makes it clear with his disclaimer:

All stories in this book are written because I was there, and it either happened to me, or I witnessed it.    That is fair.

Every person has their own unique perception of what is reality in a given moment in time. It is likely that Duswalt missed some incidents that are reported in the biographies of Slash and Duff McKagan.  But other missing incidents were too famous to be missed.  So they were likely omitted intentionally.

Several books were released by and about GNR artists as their biographies.  Prominently among them are the autobiographies of Slash – the lead guitarist and Duff McKagan – the lead bassist, as well as the drummer Steven Adler.  The kaleidoscopically colorful, creatively talented, powerfully present, enigmatic and reclusive Axl Rose did not publish an autobiography.   However he granted over the years interviews, notably to Rolling Stone magazine.  The journalist Mick Wall published an unauthorized biography of Axl Rose.

First let me mention Duswalt’s unique and friendly relationship with Axl Rose.  Duswalt defined it as: “Good friend with Axl.”  He was next to Axl Rose during most of the ‘Use Your Illusion Tour’ for over 2 years.  Duswalt started to work for Axl Rose sometime after October 15, 1991.  GNR was already on its ‘Use Your Illusion Tour’, nominally since January 20, 1991.  (Duswalt thus missed the Riverport Riot near St. Louis, July 2, 1991).

Duswalt is a few months older than Rose.  So both men are around the same age.  Nonetheless, Duswalt regards Axl Rose with reverence and this book is uncritical of Axl Rose and his whims.

Axl Rose could fire Duswalt at his whim.  But he didn’t do it.  By Duswalt’s own account Axl bought him on the road expensive gifts such as a Versace leather jacket and a Jaeger Le Coulter watch.  Well, any employee deserves a bonus every so often…  I didn’t expect “objectivity” from Duswalt the author.

This situation creates a compounded challenge.  Duswalt was during the tour, and still is, in friendly relationships with Duff McKagan and (I assume) with Slash.  That is Craig Duswalt’s nature.  Consequently, this book does not report or mention anything about the well documented tensions between Axl Rose and the other two lead musicians in the group.  GNR practically disintegrated after the July 17, 1993 performance.  The reason as Slash explains: “It was all about Axl wanting control to the point that the rest of us were strangled”.

Having been Axl’s right hand, Duswalt does not mention the tense relationships within the original band members for obvious reasons and his book is missing an opportunity to contribute pertinent historical details.

I understand that.  Duswalt reports the “cool” events that he experienced.  He studiously stays away from personal animosities among the band members.

Duswalt writes, “No drugs were allowed on the Guns N’ Roses’ Use Your Illusion tour.”  That statement is true for Axl Rose and Craig Duswalt.

Well, the reality was somewhat different.  In his 2011 autobiography, It’s So Easy and Other Lies, McKagan describes an incident where in San Francisco he arranged for a hooker to come with a pimp to his hotel room.  His thought was that the pimp will have a coke connection.  “When I explained to her that all I wanted was drugs, and that I would still pay her for her services all night, it was on.”  I heard McKagan telling that snorting cocaine required him to have subsequent plastic surgery for repair of his nasal cartilage.

Slash in his autobiography, Slash, (HarperCollins, 2007), describes at length his struggles with drug abuse after the Appetite tour (Chapter 9).

Duswalt has a proclivity to mention nudity incidents throughout the book.  I counted at least 10 episodes of nudity.  To quote Duswalt, “nudity was a big thing.”

It cracked me laughing.

There are ‘individual nudity’ episodes and there were ‘group nudity’ descriptions.  In the group nudity there is the story of the 50 naked women that a promoter brought to the band’s hotel (p. 50).  There is the description of the nude women during a Gianni Versaci’s fashion show (p. 168).

Then there are individual descriptions of nudity.  I’ll skip the details of the prank played on Duswalt himself… At the top of the list is the salacious incident (details missing) of the actress Elizabeth Taylor catching Slash in all his nude glory (p.162).

Then there are 2 different episodes when rock celebrities appeared on stage in nude.  Shannon Hoon was the lead singer in the Blind Melon band.  He is also a friend of Axl Rose.  In June 1993 he walked on GNR stage during a performance wearing a Viking helmet and carrying a large Domino pizza box.  On stage he took off all his clothes in front of an audience of 80,000 fans.  He was arrested for this act of indecency…  Adam Clayton, a bass player of the U2 band, in May 1992, presented a birthday cake in the presence of 100 people including Bono and others (p. 172).  This should not be confused with a different pizza guy story.

Not to ignore Gene Kirkland a photographer on the GNR team.  He was awarded $1,000 by Axl Rose for going naked across the street and shaking the hand of a police officer… In Buenos Aires.  Cool isn’t it?

And no, I am not ignoring the nude woman who performed sex with a car.

Leaving the nudity behind lets mention the unnatural episodes and para-normal phenomena stories.

During a performance of the song November Rain by GNR, in Caracas on November 30, 1992 the skies grew cloudy dark and soft rain poured.  When the song ended so did the rain stopped pouring (p. 80).

The last supernatural is the best – the story of “UFO Nick”.

You must read for yourself the UFO Nick story!

You must read the story for yourself because I cannot ruin this hilarious story that involves the weird whims of Axl Rose (p. 180).

Duswalt reports his eye-witness account of the historical feud between Kurt Cobain, the Nirvana lead singer and Axl Rose.  Detailed reporting – who said what to whom.  Read it if you still care (p. 174).

In order to maintain my objectivity I’ll bring up a few shortcomings I found in this book.

For reasons unknown to me Duswalt did not mention Axl Rose arrest on July 12, 1992 at JFK airport.  This arrest was a consequence of several law suits filed after the St. Louis Riot (July 2, 1991).  Axl Rose was taken hand-cuffed and two days later faced a judge in Clayton Missouri.  He was subsequently found guilty and was sentenced for probation and $50,000 fines.  Hundreds of GNR fans congregated by the courthouse.  Duswalt does not to mention this episode in his book.  Nor did I ever hear this story told by Duswalt.  However it is reported at some length with a photograph by Mick Wall.

Second, the book could have benefited from an index of names and places at the end.   There is a list of the tour concerts but no listing for the many famous names mentioned throughout the book.  I know that this is yeoman work but it’s useful for the sake of history.

Another shortcoming is the photographs in the book that were printed in black & white.  Color photographs add value to the book and the pleasure of reading the book.

Josh and Rodney are 2 high school seniors in Michigan, who work during the summertime in ground maintenance in my farm house.  I asked them recently: “Have you heard of Guns N’ Roses?”

I asked one more question: “Have you heard the name Axl Rose?” Josh’s eyebrows were raised and forehead wrinkled.

Then I asked: “Have you heard the name Slash?”

“Aha,” said Rodney “Slash is one of the world greatest guitarists in my Wii computer game – Guitar Heroes.”

There you go.  Celebrity status does not endure forever.  One has to work to maintain this this status.

In closing, if you are interested in in Guns N’ Roses and its celebrity lead artists – Axl Rose, Slash and Duff McKagan – read this hilarious book and enjoy it.