WHO WAS HARVEY SPAULDING OF SAGINAW?

WHO WAS HARVEY SPAULDING OF SAGINAW?

Mr. Harvey Spaulding whose name adorns the banner of Toastmasters club 781 was and still is a mystery to all of us in many respects.

The late Bob Heft of Saginaw MI authored a document which he handed to Paul F. Arnhold, DTM who in turn gave me a copy saying “do with it as see fit”.   This document bears the date of October 1, 2009 and is titled: Report on Harvey Spaulding.

Before going any further I have to mention who was Bob Heft.

Bob heft was a member of the Harvey Spaulding Toastmasters club 781.   Bob Heft was the designer of the present U.S. Flag with the 50 States.  Hence – the 50 stars flags.  For this achievement Bob Heft was honored in the White House by President Dwight Eisenhower.   However this is a separate story.

Harvey D. Spaulding Jr., was born sometime between 1899 –1901.   On August 1, 1915, his father Harvey D. Spaulding Sr., drowned in the Case River near Bridgeport MI while successfully rescuing Mrs. Joanna Hensler, a non-swimmer.  Harvey Jr. was at the time a student at the historical Arthur Hill High School and a member of the local Saginaw YMCA.  In 1917 Harvey Spaulding entered to serve the U.S army until the end of WWI.

Upon his return to Saginaw MI he committed himself and his life work to the local YMCA Chapter.  He would teach every non-swimmer the basic skills of swimming at the YMCA facility and Saginaw school system.  He became a physical education instructor.  He designed classes for all local schools to have swimming training. Harvey Spaulding Jr., was recognized in 1933 by the YMCA Society of Physical Program Directors.

His local efforts in physical education and swimming bore evidence when on September 26, 1946, Harvey Spaulding Jr., was recognized by the Joint Navy and War Departments for his life work.  The citation was signed by the Commanding General of the U.S. Fifth Army.

The immediate reason for the citation narrates that on “the Destroyer Escort vessel that was sunk by a Japanese diver bomber during action in the South pacific, thirty-four of the sixty survivors were from Saginaw.  Thirty-two of those survivors were taught by Harvey D. Spaulding Jr.”

Sixty-five years ago, Harvey Spaulding Jr. was instrumental in opening the Toastmasters International Club 781 in the Saginaw YMCA in February 1950. 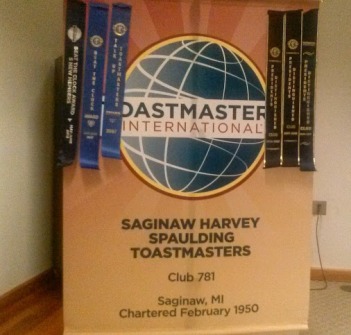 This post was excerpted from a report by Bob Heft based on the book titled “A Century of Service” by Crittenden & Smith pages 128-131.

All dating errors are by the poster of this blog.